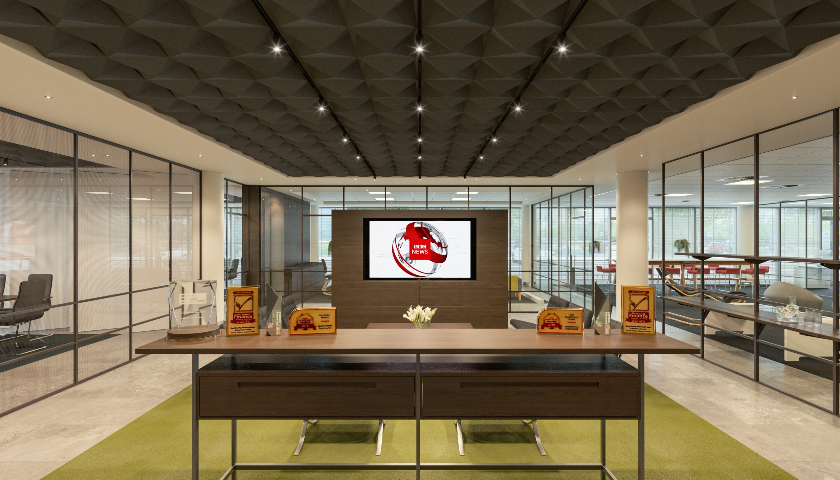 Hunter Douglas Architectural, the global architectural products company, has celebrated the fifth anniversary of the launch of its award-winning, innovative HeartFelt® ceiling and wall system.

The world’s first linear felt ceiling system has revolutionised how designers and architects apply their designs – and not only is it budget friendly, it is made from 100% recyclable material, including the carrier system.

Since the linear ceiling system was introduced to the world in 2017, going on to win the prestigious Red Dot Award in the product design category that year, Hunter Douglas has introduced new and exciting applications for the system, enabling designers to choose a sustainable product that is also aesthetically pleasing for their scheme.

One of the latest projects is the installation of a stunning ceiling in the new headquarters for Equity Release Supermarket, in Bridgewater Place, Birchwood Park, Warrington, Cheshire.

When it relocated from a neighbouring building in Bridgewater Place, it wanted a fresh, new look for its headquarters and designer Studio SDA Architecture, which is based in Chorley, included HeartFelt® Origami ceilings for a number of meeting rooms and reception.

HeartFelt® Origami is based on the ancient Japanese folding techniques, which gives the felt panels additional rigidity and superior acoustic properties, as well as a particularly attractive finish.

Origami, the newest HeartFelt® product to come to market, offers an exclusive and highly creative ceiling finish. Because there are five different sizes, the designer has the freedom to choose a shape, or combination of shapes, that best suits a particular space, while striking tones or single colour designs can be created by selecting from five shades of grey, ranging from white to black.

Hunter Douglas Architectural was specified to supply about 100m2 of its HeartFelt Origami panels in 400mm x 400mm size in mid grey 7597. These were also specified with a black integrated lighting track with black spotlights.

David Harris, general manager of Hunter Douglas Architectural UK, said: “Since the first HeartFelt® linear ceiling was installed at the headquarters of Moneypenny, in Wrexham, the product has taken the architectural world by storm.

“More designers have come to appreciate what a versatile and attractive product it is and how it can be used to make an
ordinary space stand out.

“As market demand has grown, so has the innovation at Hunter Douglas, which has introduced a number of new HeartFelt®wall and ceiling systems, as well as colourways. There are still exciting developments to come and we’ll be excited to introduce them.”

Mark Gregory, founder and CEO of Equity Release Supermarket, said: “Being innovators in the later life market, we wanted to also create a unique feel for our new offices in Cheshire – one where corporate partners would enter and have that ‘wow’ factor.

“The minute everyone now walks into our reception and meeting rooms, with the Origami ceiling around them – with the lighting inset and ventilation strips alongside, it does exactly that.

“Being one of the first in the UK to showcase the Hunter Douglas ceiling, we are really proud of the effect and environment it has created for both visitors and, importantly, our office staff.”

Acoustic comfort is another of the attractions of a HeartFelt® ceiling and tests have shown that with the linear system absorption values (αw) between 0.45 (module 100) and 0.70 (module 50) can be achieved. With the Origami, that increases to a sound absorption value of αW 0.8, ensuring reverberation and noise in busy office landscapes, public buildings or other premises are greatly reduced.

The HeartFelt® collection now comprises: linear ceiling and wall systems, which are available in rounded and box-shaped panels; baffles; and the latest – origami.

The colour range has also expanded from five grey shades to also include five earth tones, from umber to crème. The linear system is available in heights of 55, 64, 80 and 105 mm.

The panels are available in up to 6m lengths and are fixed via a special carrier system. All HeartFelt® systems comply with regulations for use in non-polluting buildings. They are also resistant to dirt and dust, meets the indoor European standard EN 15251, and EN 13501 Class B, S1, d0 fire certification.

The panels are manufactured using thermoformed polyester fibres which are 100% recyclable – earning the system C2C Bronze certificate from the Cradle to Cradle Products Innovation Institute.