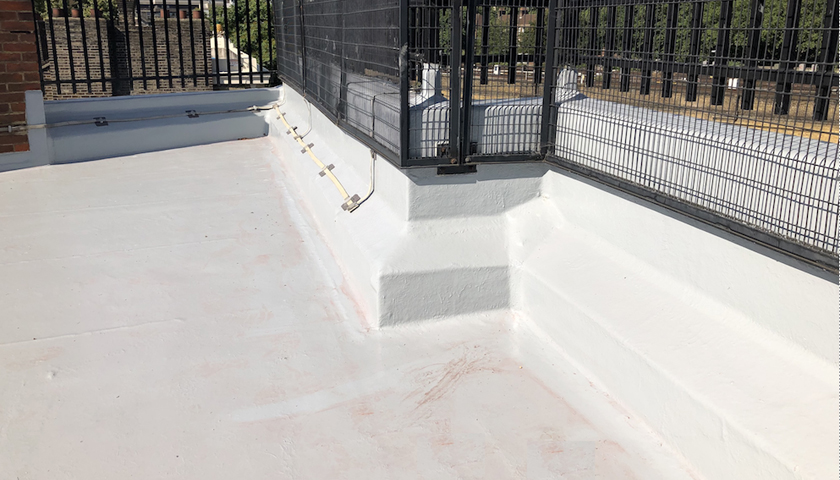 For the refurbishment of the roof on Blake House, a City of London Corporation owned housing development in Lambeth, Langley Waterproofing Systems’ Paracoat Cold Polyurea Liquid Balcony and Walkway System was used to provide a safe, reliable and quick to apply waterproofing solution that would help minimise disruption for residents.

Blake House, built in 1922, is part of the William Blake Estate. Located in the London Borough of Lambeth, the property and estate takes its name from the famous poet and artist who lived in the area at the end of 18th Century.

In recent years, the building has suffered several roof leaks and, significant costly remedial work has been carried out to address issues of water ingress. A recent survey of the roof identified further areas of concern and confirmed that the roof coverings had reached the end of their effective life. The project went to tender and M.H. Goldsmith & Sons Limited, a specialist Langley approved roofing contractor, was appointed to undertake the renewal of the flat roof. The work included the 900 square metre roof area, which is accessible for residents to use as an outdoor space and amenity area.

Dennis Goldsmith, Director at M.H. Goldsmith & Sons, explained: “We needed a waterproofing system that could be applied quickly and efficiently but would also provide a high level of durability. As the residents would remain in the building throughout the work it was also important to ensure complete safety and minimise disruption. The fast curing Langley Paracoat Cold Polyurea system was an ideal solution for this project.”

The structure of the roof included an abundance of details, such as upstands, access doors, rooftop penetrations and perimeter details that added a high level of complexity to the installation. The cold applied, wet on wet, fully reinforced liquid system simplified waterproofing around these details and allowed a consistent and reliable seal to be formed in all areas of the roof. Due to a flame-free installation process, the Paracoat Cold Polyurea system eliminated the risk of fire from hot works to provide safety for residents and peace of mind for the local authority. The Langley system can also be installed with a slip inhibiting finish, fully compliant with BS 7976 Pendulum tests and is therefore particularly suitable for areas with high foot traffic such as balconies, walkways and rooftop terraces.

Furthermore, once the Langley Paracoat Cold Polyurea system is installed, the roof can withstand foot traffic within hours. With the work taking place during the spring, one of the key advantages of the system was that it allowed the contractor to minimise the impact of the weather on the progress of the work. Using a fast curing system that could be installed in lower temperatures if necessary, the operatives on site were less dependent on sustained good weather. As a result, the application of the waterproofing was completed in eight weeks with a further four weeks required to complete the remainder of the works, reducing the amount of disruption for the residents in the building.

Paul Murtagh, Assistant Director of Housing for the City of London Corporation, said: “We were looking for a quality, cost effective waterproofing system that could be applied quickly, safely and with the minimum of disruption for our residents. The Langley Paracoat Cold Polyurea system fitted the bill and, we were particularly impressed by the ease and speed of the installation and the quality of the finished product.”

Dennis concluded: “We were impressed by the Paracoat Cold Polyurea system, it has proved to be a high-quality system that we will be using on future projects. Langley provided full training to our installation team prior to the works and remained on site during the initial stages to provide support, as well as the usual weekly inspections. We found it quite simple to use and as a result the install went very smoothly.”

In June, M.H. Goldsmith & Sons was awarded Langley’s Contractor of the Month for its work on Blake House.

To find out more about Langley’s Waterproofing Systems click here.