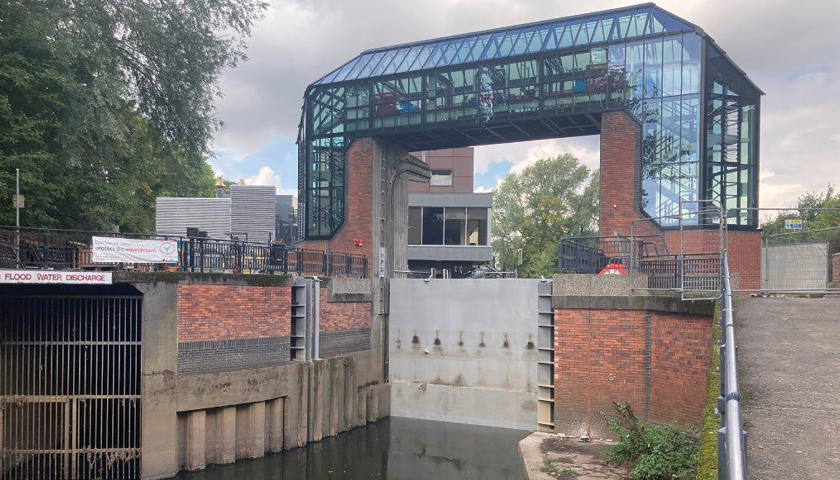 In December 2015 severe floods hit the City of York. Flood waters rose to the highest recorded on the River Foss. Water entered the main control building of the Foss Barrier putting it out of action. Within three months work had begun on a multi-million-pound improvement scheme, upgrading the Foss Barrier to achieve better flood protection for homes and businesses.

The barrier was opened in 1988 and the upgrade was to replace the gate and its mechanical parts along with access and architectural features. Planning permission was granted on replacing like for like against the original structure.

Glazed Structure
The Foss Barrier gate is raised and lowered on steel wire ropes which are wound onto drums at either end of the glazed bridge connecting the two side towers. The physical size of the towers and the bridge were increased to accommodate new lifting equipment and to replace the access ladders with a staircase.

JBA Bentley appointed patent glazing specialist Howells to supply and install new and replacement glazing for the extended bridge. The Birmingham-based business was a new supplier to the main contractor and was sourced from market.

Howells also designed and manufactured four adjustable louvres within the vertical glazing. These were a direct replacement to what was previously there and for the purpose of ventilation.

The patent glazing was fitted to a new steel framework within the structure.

Challenging Design and Fit
“The greatest challenge was setting out and making sure that everything aligned once it was installed, given we were working with an existing structure,” comments Richard Timson, site manager JBA Bentley.

“We also had to ensure that the bridge in its new operation had no flex which would impact the glazing. This was a factor which would not be truly understood until it was put into service.

“Working with Howells was a very positive experience. They did exactly what they said they would. And given the complexity of the structure and its location, health and safety was good. Overall, we’re very impressed especially as JBA Bentley and Howells had not worked together previously.”

Upgrade Complete
Improvement work to the barrier gate was finished earlier this summer and it now forms an integral part of York’s flood defences, protecting more than 1,200 local homes and businesses. The pumping capacity has increased, and mechanical and electrical (M&E) operating equipment has been replaced. The new 28ft tall flood gate was lifted into place in January 2021, marking a major milestone for the project.

To find out more about Howells Glazing click here.