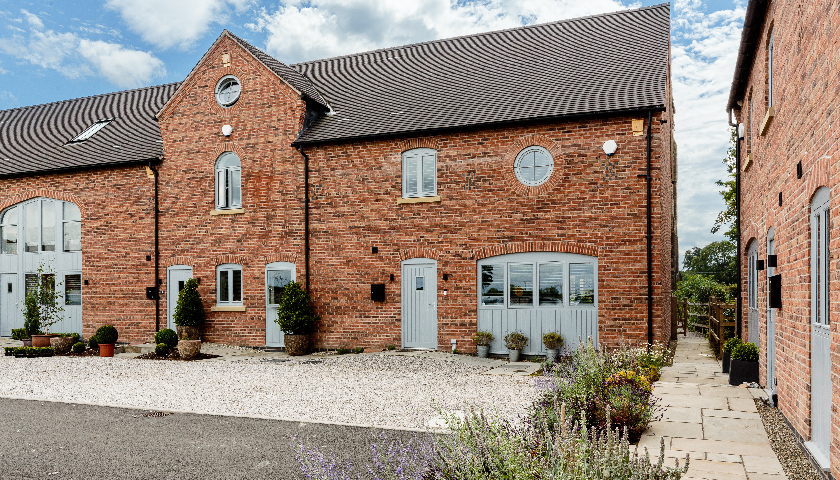 Keystone Lintels has provided a range of innovative, prefabricated brickwork solutions as part of the restoration and conversion of a series of barns into new homes along with the creation of nine new build houses.

Church Farm Barns in the village of Acton in Cheshire is located in a conservation area near the market town of Nantwich. The scheme, delivered in two-phases, has seen the restoration and conversion of three barns and a six-bed Grade II-listed Georgian farmhouse along with the construction of nine new-build two, three and four-bedroom homes. Built by Chamberlain Developments, the second phase of the project required brickwork design for the new-build homes, which was in keeping with the heritage sensitivity of the site and adjacent barns and farmhouse. The specification required a number of unique, one-piece brick slip feature lintels which were designed by Keystone’s technical team and manufactured in a factory controlled environment negating the need for complex brick cutting on-site.

The nine new-build homes feature a combination of eighty bespoke Flat Gauge Brick Slip Feature Arches, as well as Bullseye and Parabolic Lintels, each requiring a flawless brick surround finish to match the brick being used on-site and in keeping with the appearance of the converted barns.

Keystone collected a consignment of bricks from the developer to ensure the brick slips matched the ones being used on site. These were then cut and bonded onto load bearing lintels using a BBA approved construction adhesive.

The patented perforated design of a Keystone Brick Slip Feature Lintel allows the adhesive to squeeze through the perforations and form a ‘mushroom’ on the inside, providing a mechanical lock between the steel lintel and the bricks.

The plans received from T G Builders Merchant originally included brick slip lintels for the front and rear elevations only however, Keystone’s team were able to offer Chamberlain Developments a solution for the other more intricate brick details and the specification was therefore increased to include additional brick slip flat gauge arches and bullseye lintels for the side elevations.

Commenting, Richard Bullock at Chamberlain Developments said: “We have specified Keystone many times before and have always been impressed with both the company’s products and customer support. At our Church Farm development, the brick slip feature lintels played a key part in the design of the new build homes. They look fantastic and the excellent detailing ensures they blend seamlessly with the rest of the brickwork.”

Keystone is the largest supplier of steel lintels in the UK and Ireland and carries more stock than any of its rivals. For bespoke applications, architects, housebuilders and contractors can specify brick feature requirements by utilising Keystone’s free Brick Slip Feature Lintel design service.

Now complete, the development at Church Farm has successfully blended the old with the new, with Keystone Brick Slip Feature lintels ensuring the developer’s vision for this project is maintained by producing complex brickwork detailing off-site in a controlled factory environment.